Blog - Latest News
You are here: Home / ManageOps Blog / Wait – Support for WHAT is ending WHEN?

You may have already heard rumblings about support for Windows 7 and Windows Server 2008 (and 2008 R2) ending in January. It’s true that mainstream support for those products ends January 15, 2015, but extended support will continue for another five years – so there is no need to panic. Here’s a helpful Microsoft graphic that clarifies the difference in the support phases: 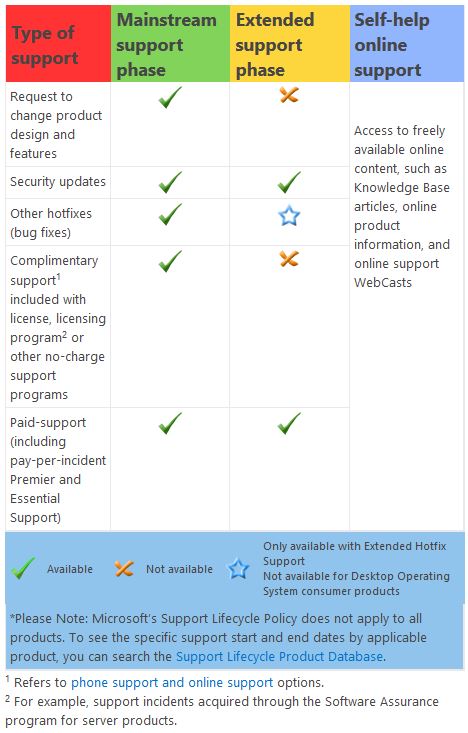 So the most critical thing we need – security updates – we will continue to get, and if you really get into a jam, pay-per-incident support will still be available.

What this really means, particularly for the desktop side of things, is that it’s time to start seriously thinking about what comes next. No one but the purveyors of malware will benefit if we have another struggle like we did with Windows XP (“You can upgrade my Windows XP system when you pry it from my cold, dead hands!”). Yes, it was a great O.S., arguably the best that Microsoft had produced at the time, and maybe, just maybe, even better than Vista – although I’m not entirely ready to concede that. (I liked Vista – I was just annoyed by the lack of device drivers when it was released.) But Windows 7 was clearly a superior Operating System, and the resistance to change finally reached the point where it was just silly. Heck, as recently as last month, Windows XP still had a 17% market share, according to Net Applications, and that’s just crazy from a security perspective.

I’m cautiously optimistic that Windows 10 (what the heck happened to Windows 9, by the way?) will be Microsoft’s next great desktop O.S. I ran Windows 8 for quite a while, and I’m now running Windows 8.1, but I’m also running Start8 from Stardock Software, which gives me back some of the features whose absence in Windows 8.x I found most annoying. It sounds like Windows 10 may, out of the box, do the things that Windows 8.x only did with the addition of third party utilities. That may not be good news for the makers of those third party utilities, but it’s an indication that Microsoft understands that they missed the mark and plans to address those issues. So, if I was a desktop admin for a sizable company, I’d be all over the early releases of Windows 10 and already starting to plan how I’m going to transition to it, if it’s as good as it appears it may be.

On the server side, there’s no reason not to deploy Windows 2012 R2 on any new servers you’re installing these days. It’s a fine O.S., it’s stable, it’s secure. You may as well start getting your feet wet, if you haven’t already.

Are the Advantages of BYOD Worth the Security Risks? eDiscovery Part 3 – Email Discovery Hold in Microsoft Exchange
Scroll to top