Blog - Latest News
You are here: Home / ManageOps Blog / So You Want to Be a Hosting Provider? (Part 1)

If you’re a VAR or MSP, you’ve been hearing voices from all quarters telling you that you’ve got to get into cloud services:

If you place any credence at all in these predictions, it’s pretty clear that you need to develop a cloud strategy. But how do you do it?

First of all, let’s be clear that, in our opinion, selling Office 365 to your customers is not a cloud strategy. Office 365 may be a great fit for some customers, but it still assumes that most computing will be done on a PC (or laptop) at the client endpoint, and your customer will still, in most cases, have at least one server to manage, backup, and repair when it breaks. Moreover, you are giving up a great deal of account control, and account “stickiness,” when you sell Office 365.

In our opinion, a cloud strategy should include the ability to make your customers’ servers go away entirely, move all of their data and applications into the cloud, and provide them with a Windows desktop, delivered from the cloud, that the user can access any time, from any location where Internet access is available. (Full disclosure: That’s precisely what we do here at ManageOps, so we have an obvious bias in that direction.) There’s a pretty good argument to be made that if your data is in the cloud, your applications should be there too, and vice versa.

The best infrastructure for such a hosting environment (in the opinion of a lot of hosting providers, ManageOps included) is a Microsoft/Citrix-powered environment. Currently, the most commonly deployed infrastructure is Windows Server 2008 R2 with Citrix XenApp v6.5. Microsoft and Citrix both have Service Provider License Agreements available so you can pay them monthly as your user count goes up. However, once you’ve signed those agreements, you’re still going to need some kind of hosting infrastructure.

Citrix can help you there as well. Once you’ve signed up with them, you can access their recommended “best practice” reference architecture for Citrix Service Providers. That architecture looks something like this: 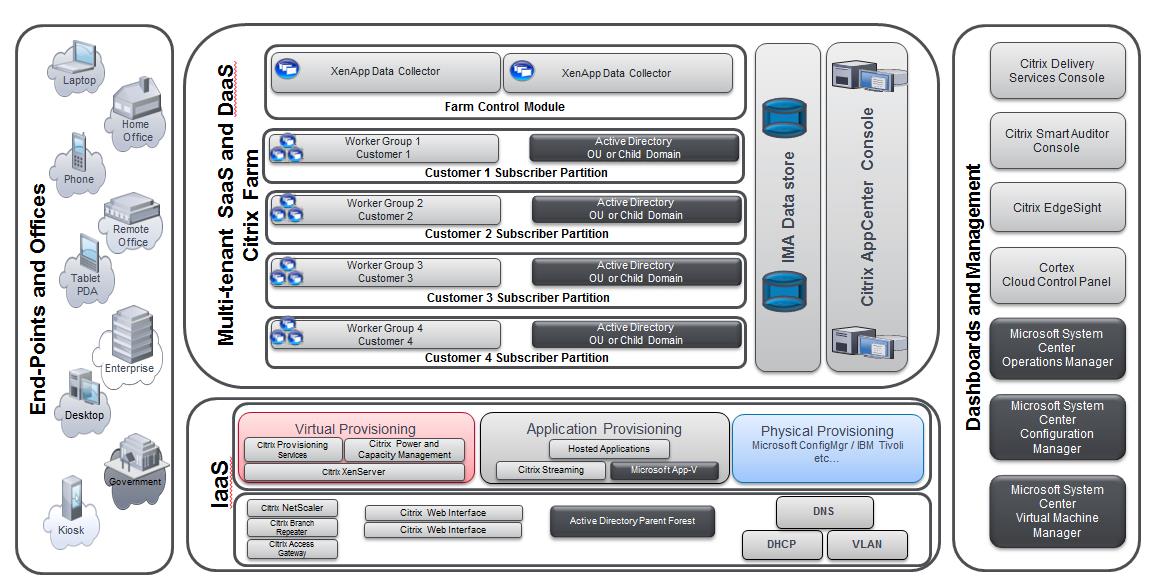 When you’ve become familiar enough with the architectural model to jump into the deep end of the pool and start building servers, your next task is to find some servers to build. Broadly speaking, your choices are:

Now, in all fairness, the reference architecture above is what you would build if you wanted to scale your hosting service to several thousand customers. A wiser approach for a typical VAR or MSP would be to start much smaller. Still, you will need at least two beefy virtualization hosts – preferably three so if you lose one, your infrastructure is still redundant – a SAN with redundancy built in, a switching infrastructure, a perimeter firewall, and something like a Citrix NetScaler (or NetScaler VPX) for SSL connections into your cloud.

Both VMware and Hyper-V require server-based management tools (vCenter and System Center, respectively), so if you’ve chosen one of those products as your virtualization platform, don’t forget to allocate resources for the management servers. Also if you’re running Hyper-V, you will need at least one physical Domain Controller (for technical reasons that are beyond the scope of this article). Depending on how much storage you want to provision, and whose SAN you choose, you’re conservatively looking at $80,000 – $100,000. Again, if geo-redundancy is desired, double the numbers, and don’t forget to factor in the cost of one or more co-location facilities.

Finally, you should assume at least 120 – 150 hours of work effort (per facility) to get everything put together and tested before you should even think of putting a paying customer on that infrastructure.

If you’re not put off by the prospect of purchasing the necessary equipment, securing the co-lo space, and putting in the required work effort to build the infrastructure, you should also begin planning the work required to successfully sell your services: Creating marketing materials, training materials, and contracts will take considerable work, and creating repeatable onboarding and customer data migration processes will be critical to creating a manageable and scalable solution. If, on the other hand, this doesn’t strike you as a good way to invest your time and money, let’s move on to other options.

Once you’ve created your list of equipment for option #1, it’s easy enough to take that list to someone like Rackspace and obtain a quote for renting it so you can get a feeling for option #2. The second part of this series will take a closer look at the next option.

“Data Gravity” and Cloud Computing So You Want to Be a Hosting Provider? (Part 2)
Scroll to top