A couple of days ago (June 2), the UK’s National Crime Agency announced that law enforcement agencies have effectively disabled key nodes of the GOZeuS network, which provided a key delivery mechanism for CryptoLocker’s ransom malware. They’ve also identified a person believed to be the leader of the criminal enterprise behind GOZeuS, and international officials say that other arrests are “in progress.”

While this is good news, it’s unlikely to be a permanent solution to the ransomware problem, given the distributed nature of Internet-based malware. It does, however, give us some breathing room – perhaps as much as a couple of weeks – to think about how to protect against it.

In case you’re not familiar with what CryptoLocker is, it is a particularly nasty form of malware that first appeared in the fall of 2013, and is typically spread by tricking a user into clicking on a disguised executable. Disguised executables are, in part, enabled by the unfortunate design choice Microsoft made in Windows XP that continued through Windows 7, which was to “Hide extensions for known file types” by default. (Personally, this always annoyed me, and one of the first things I always did when setting up a new PC was to deselect that option. It does appear that it is no longer selected by default in Windows 8 and 8.1.)

This meant that, for example, a Word document that was called “My Important Customer Proposal.docx” would display in Windows Explorer (and elsewhere within the OS) as, simply, “My Important Customer Proposal.” That also meant that if someone sent you an email with a file attachment called MalwareDesignedToStealYourMoney.pdf.exe, it would display in Windows as, simply, MalwareDesignedToStealYourMoney.pdf. An unsophisticated or careless user – or someone who perhaps was just exhausted from a long day and not thinking clearly – might look at the file name and think it was an ordinary Adobe PDF file, and double-click on it to open it up…not realizing that the “.exe” that was hidden from them meant that it was really an executable that was designed to install malware on their system.

“But why,” you might ask, “wouldn’t my anti-virus software protect me against this?” The answer is that some anti-virus products might protect you, depending on how the options are set. But many, if not most, users have local administrator rights to their PCs. (Yes, arguably they shouldn’t, but every IT admin that’s ever tried to take those rights away has had to deal with the howls of protest when users – often top executives – suddenly can’t install iTunes or some other equally essential utility on their PCs.) So unless your AV product is set to scan files whenever they are accessed – a setting that often isn’t enabled even on products that are capable of doing it because it can slow your system down – you won’t know that you’re installing something bad until it’s too late. Local administrators, by definition, have the authority to install software. You launched the installation program, you’re a local administrator, so it’s going to get installed. 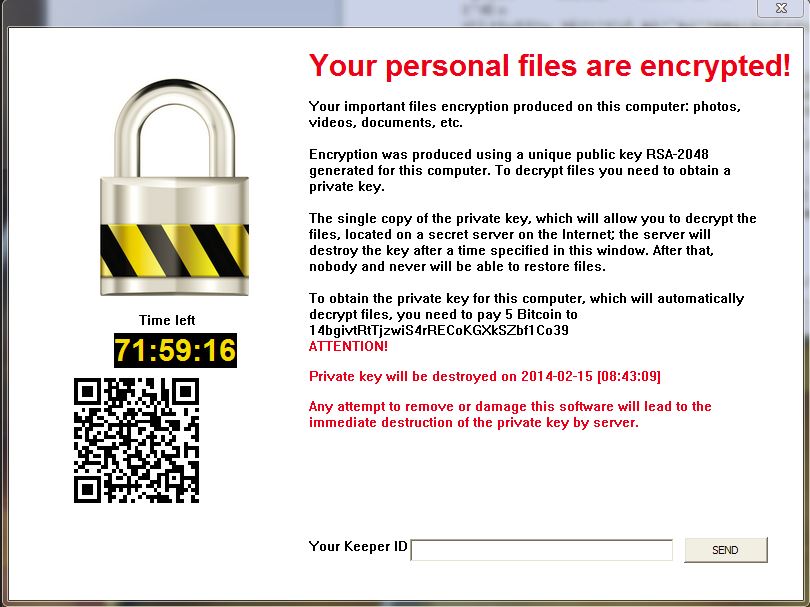 Once installed, CryptoLocker checks in with a server on the Internet that assigns a public/private key pair to that PC, and CryptoLocker then happily goes to work using the public key to encrypt all the documents, spreadsheets, pictures, etc., on your system. The latest variants will even encrypt files on network drives if they’re mapped using a drive letter. (So far, it doesn’t appear that CryptoLocker knows how to navigate across UNC paths.) There is even some evidence that the latest variants may wait up to two weeks before locking you out of your files, in the hopes that you will move through a full cycle of backups during that time, meaning that all your backups will also be encrypted and therefore useless to you. Once it’s done its dirty work, you will suddenly be unable to access any of your files, and will be presented with a screen that tells you that you have, typically, 72 hours to submit payment – typically via untraceable money cards or bitcoin – in order to obtain the private key that will decrypt your files. Otherwise, the private key will be automatically destroyed, and your files will be forever out of your reach.

If the thought of having to cough up the equivalent of $300 US or lose all your data leaves you with cold chills (as it does me), what can/should you do?

Please do not assume that the latest law enforcement announcements mean that we don’t have to worry about CryptoLocker anymore. It’s estimated that CryptoLocker raked in as much as $30 million just in the first 100 days after it appeared in the wild. With that much money in play, it – or something else like it – will inevitably reappear sooner or later.